If Jim Johnson’s Shadow Is Too Large, Try Going Outside Of It

So, now that the Eagles have finally moved past the dark days of the Ginger McDermutt-era – but not yet those of The Walrus – there are a few names being circulated as to who will replace him as the Bird’s next Defensive Coordinator.

As you know, my cries of Rob Ryan (predictably) went unanswered and now we’ll have to deal with him twice a year  – and with DeMarcus Ware, Anthony Spencer and Jay Ratliff at his disposal. Wonderful. That’ll work out great for the Eagles (though fortunately, the Cowgirls don’t have a single defense back to fear). Other fans were chirping for former-49ers Head Coach Mike Singletary – who famously captained Buddy Ryan’s vaunted 46 defense during his playing days in Chicago – but he’s now coaching the linebackers for his former Bears-teammate Leslie Frazier in Minnesota.

Many sources have been touting Jim Mora, Jr. as the frontrunner for the gig, with Dick Jauron not far behind. I highly doubt that Jauron gets offered the job, considering the fact that Reid could have made the move to him at any point over the course of last season. It does seem strange that he hasn’t accepted the Cleveland Browns DC position yet, giving credence to the rumors that he may stay here, but it seems that Reid is intent on completely cleaning house defensively, cutting ties with longtime Defensive Line coach Rory Segrest. Bill Shuey, Linebackers coach, inexplicably still has a job…

As for Mora, sure, he comes from the Mike Holmgren coaching tree and has been a Head Coach (twice), but absolutely nothing remarkable jumps out from his coaching career… besides the time he called Mike Vick a coach killer! His numbers as a Defensive Coordinator (with the 49ers from 1999 to 2003) and Head Coach (with the Falcons from 2004 to 2006, and the Seahawks in 2009) are pretty bad. Sean McDermutt-bad.

In his eight combined years in charge of the defenses in San Francisco and Atlanta, Mora’s units had an average rank of 19th in total defense, never cracking the top-12 in any single season. Even McDermutt reached that mark. Similarly, Mora’s defensive scoring averaged 19th overall. In his three years in Seattle – two as Defensive Backs Coach – the defensive backfield ranked 27th overall in passing yards allowed per game, 18th in interceptions and 21st in passes defended. In short, Mora’s defensive units have been mediocre to bad to horrendous. And he’s going to be the Eagles next DC?!

Surprisingly – or I guess, not surprisingly, since his name has been mentioned for EVERY defensive coaching position available – Eric Mangini’s name was thrown into the mix. It’s definitely an intriguing name. Though he failed twice as a Head Coach, and has a reputation around football for being a huge prick, Mangini was an integral cog in Bill Belichick’s Super Bowl-winning defenses – though with the alleged use of video cameras (made by Mangini no less), who knows how effective Belichick’s defenses really were.

What’s enticing about Mangini – aside from the Super Bowl pedigree – is the fact that he solely runs a 3-4 defense. And in a constantly evolving game, the 3-4 is currently (and once again) king, with almost half of the teams in the NFL – 15 in all – utilizing some form of the 3-4 as their base defense. In fact five of the top-six defenses in 2010 run a base 3-4 (the Chargers, Steelers, Jets, Packers and Dolphins).

Is this Eagles defense equipped with the right personnel to make such a dramatic switch? Probably not. For one thing, they certainly don’t have the boulder-sized, beast-of-a-nose-tackle needed to anchor the 3-4. And on top of that, they jettisoned three guys last offseason who would have fit perfectly in that alignment (Chris Gocong, Chris Clemons and – Pro Bowler?! – Jason Babin).

But, as pointed out by NFL Network’s Mike Lombardi on Tony Bruno and Harry Mayes’ 97.5 The Fanatic midday show, in an offseason that could likely see a shortened training camp/pre-season (ie. Practice Time), it’s unlikely that the Eagles would drastically change their schemes and philosophy (you know, short of firing The Walrus and starting fresh).

Here are two names that that you haven’t heard of (at all), but should warrent some attention: Mark Carrier and Darren Perry. 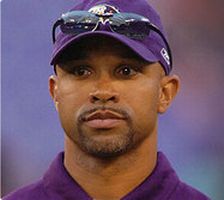 Mark Carrier, current Defensive Line Coach for the New York Jets, followed Rex Ryan from Baltimore, where he was the Ravens’ Secondary Coach from 2006 to 2009. Carrier, a three-time Pro Bowl free safety with the Bears, Lions, Redskins from 1990 to 2000, heads a defensive front ranked 5th against the run, 11th versus the pass and 8th in total sacks (with no one player getting more than 4.5 for the year). That’s a really solid unit, who absolutely battered and mauled Tom Brady yesterday.

From 2005 to 2009, Carrier had the Ravens’ secondary consistently in the top-ten of every major category, with a four-year average of the 9th overall pass defense, 5th in interceptions (#1 overall twice) and 4th in passes defended (#1 in ’08).

Darren Perry, current Green Bay Packers’ Defensive Backs Coach, was also a safety in the NFL (with the Steelers, where he was paired with Rod Woodson, Chargers and Saints from 1992 to 2000) – and also broke some interception records at a certain school coached by one JoePa. Over the past two seasons, Perry has coached the Packers’ secondary to extraordinary numbers (5th overall in passing yards in 2009 and 2010; 1st in INT in 2009, 2nd in 2010; 1st in passes defended in 2009, 2nd in 2010), in large part to Charles Woodson. But Perry’s units have progressed nicely as he’s matured as a coach, having averaged 13th in pass yards, 11th in picks and 10th in passes defended with the Steelers from 2004 to 2006, and with the Raiders in 2007 and 2008, he averaged 9th, 10th and 17th, respectively. For his career, his unit’s average in the top-ten in each category. Shouldn’t this guy be a scorching hot Defensive Coordinator candidate? He has been at the tutelage of legendary Defensive Coordinators Dick LeBeau and Dom Capers… teams just haven’t noticed him?

Why not take a shot at one of these young, up-and-coming coaches? Sean McDermutt comes to mind. But why not? This defense is young and needs new blood. Dave Wannstedt is not new blood. Dick Jauron and Bill Davis aren’t new blood. Even Eric Mangini is used up and tainted by losing.

Perry and Carrier’s teams are still playing. Their defenses rank in the top-five in the league. I say The Walrus waits a week or two and tries to sink his tusks into one of these two.

If not, it’ll likely just be more of the same. And we’ll still be calling to Fire the Walrus.

This entry was posted on Monday, January 17th, 2011 at 6:37 pm and is filed under The League, The Walrus. You can follow any responses to this entry through the RSS 2.0 feed. You can leave a response, or trackback from your own site.