A lot of readers have been asking me about my affinity for a hard-nosed, head-hunting, Buddy Ryan-style defense. Well aside from the old adage “Defense Wins Championships,” there are a few reasons:

That last point is key. The seminal Eagles teams are the squads from 1988 to 1992. The Buddy Ryan-era. The Reggie White/Jerome Brown-led defenses. Easily the best defense ever to not win an NFL championship, but unfortunately, a team that desperately underachieved – going 1-4 in the playoffs with division rivals grabbing three Super Bowls in that span (Washington Redskins twice and the New York Giants once).

As infuriating as it is to look back on what those teams didn’t accomplish, Eagles fans still hold that era in the highest regard. Much like Buddy’s son Rex’s current Jets team, those Eagles teams were boisterous and loud-mouthed, tough, terrifying and vicious, and, above all else, cared more about beating the Cowgirls than stats and records. They were the “Bounty Bowl” team. The team that once beat up the Redskins so badly the game was deemed “The Body Bag Game.” Those moments endeared them to Eagles fans forever.

For fans that weren’t around during that era, it’s hard to articulate why those teams are still so beloved. If you were to look at stats and their win-loss record on paper, you won’t be blown away. You had to be there. You had to witness it. No Eagles team really compares (though Jim Johnson’s defense at the height of its powers with Dawkins, Douglas, Trotter, Vincent, Taylor, etc. comes pretty close) and the current regime – with its focus on a high-powered downfield offense – is a far cry from the smashmouth, brutalizing football played here in the late-80’s/early-90’s. 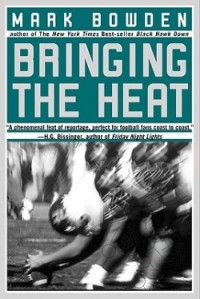 If you really want to understand why those teams were so meaningful, why its so heartbreaking that they severely underachieved and why Eagles fans still pine for the days of that defense, I implore you to read Mark Bowden’s 1994 tome, Bringing the Heat.

Bowden, a Philadelphia Inquirer staff writer from 1979 to 2003, and author of the award-winning Black Hawk Down, chronicles the Buddy Ryan/Rich Kotite-era Philadelphia Eagles in immense and surreal detail. He beautifully explores the cast of characters – from Ryan and Kotite, to White and Brown, to Cunningham and Joyner and even Norman Braman – and absolutely covers every angle, story, season and meaningful moment from that timeless Eagles era.

Bringing the Heat extensively covers the 1992 Eagles season, following the devastating and tragic death of Jerome Brown, and the subsequent destruction of the team, but, as the title suggests, explains why Buddy Ryan’s mentality (and defense in general) is so important to the game of football.

Do yourself a favor and pick up a copy of Bringing the Heat. You won’t be disappointed. You’ll fall in love with what Rex Ryan is currently doing (last week’s win against the Patriots epitomizes this sentiment).

Most importantly, you’ll fully comprehend why it’s time to finally Fire The Walrus.

This entry was posted on Saturday, January 22nd, 2011 at 11:04 am and is filed under The Walrus. You can follow any responses to this entry through the RSS 2.0 feed. You can leave a response, or trackback from your own site.