The Curious Case of Michael Vick… Or, How I Learned to Admit I Was Wrong and Love the Quarterback

On July 6, 2010 I wrote the following (presented unchanged):

For the record, I was never a fan of adding the (once) phenomenal athlete to the team – and, unlike many people, my displeasure had nothing to do with the fact that he killed dogs(**). I’m not really sure what people ever saw in him besides his speed and agility, but “Earth to football executives…” he is NOT AN NFL QUARTERBACK!

**Though as a dog lover, I can’t say that didn’t play some role.

Has anyone ever seen Vick throw a legitimate pass under 60 yards? No, because he couldn’t execute a proper screen pass, cross pattern or out route to save his life. And he’s a left-handed quarterback to boot, which gives him an automatic handicap(***). I get that he has a cannon for an arm and can throw a tight spiral the length of the field, but how the hell is that supposed to work in Andy Reid’s dink-and-dunk west coast offense?

***Can anyone name the top-five left-handed quarterbacks in NFL history? Number one is obviously Steve Young – the model for all left-handed football players (and I would have called him the “gold standard,” but Jeffrey Lurie and Joe Satan Banner have forever tarnished the meaning of the word). But then it goes Kenny Stabler, Boomer Esiason and Mark Brunell. Number five? Detroit Lions great Scott Mitchell. That’s how pathetic the list of southpaw QBs is, and the number one reason why you should NEVER trust a left-handed passer (sorry to break it to you Arizona fans, but Matt Leinart ain’t the answer).

Wow, how’d that turn out? I’ll be the first to admit that I was horrifically wrong – except for the Matt Leinart/left-handed QB part – but I absolutely stand by the first paragraph. That was 100 percent my opinion on Michael Vick prior to Kevin Kolb’s brain being shaken violently by Clay Matthews, Jr. in week one of the 2010 NFL season.

And honestly – unless you were an out-and-out Vick fan and apologist for his entire career, claiming he was Superman – you probably thought something along the same lines. He was a glorified running back with an inaccurate cannon of an arm.

Then he came to the Eagles. 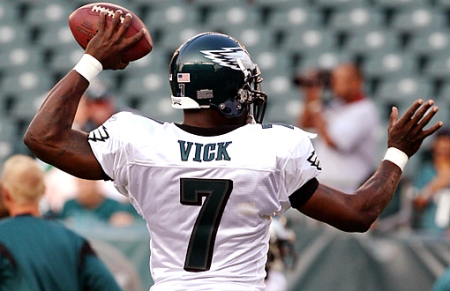 The Walrus gets very-little-to-no credit for Vick becoming the ultimate weapon he eventually became this season. Coaching-up Quarterbacks is one of Andy Reid’s that I truly appreciate, but let’s get one thing straight: He had no idea what Vick was(*).

The Walrus convinced The Billionaire and The Devil to “take a chance” on Vick when nobody else would – partly because of the issues with his sons, but mostly do to the fact that Reid thought he could get a second round pick for him if he showcased him enough in the Wildcat. Add to that the insane amount of publicity and attention they received “rescuing” the polarizing, social-pariah Vick, and The Devil and Lurie were all-in.

They continued the charade by paying him a roster bonus of $1.5 million, guaranteeing his $5.25 million base salary, which they figured wouldn’t matter because they’d be dumping him, and, according to many sources, particularly ESPN’s Sal Paolantonio, tried relentlessly to do. But they failed, and were on the hook for that money whether they released him or not – and we know how the Eagles feel about wasting money. And, if you recall correctly, they didn’t even give him a chance to compete for the starting Quarterback spot. He won it by default, when Kolb got concussed and Vick played like Vick.

Sure, you could argue that Reid and his coaching staff did wonders with Vick, turning him into the dynamic force he became this season. But how come they didn’t recognize that in the mini-camps or Training Camp? How come he was still being regulated to that Wildcat bullshit on the first two drives of the season? Because The Walrus thought he had re-invented football? Actually, yes. They had no idea what they had with Vick until Week 3, when he had a coming-out-party against the Jaguars, throwing for 291 yards and three touchdowns (119.2 QB rating), running for another TD and no turnovers.

Mike Vick finally proved why he was taken 1st overall in the 2001 NFL Draft. His upside was something nobody had ever seen done on a football field, and he didn’t reach it in Atlanta. It took a total shakeup of his life – from his occupation and freedom, to his financial and social status, to his friends and loved ones, even down to his core beliefs and world-view – and then his subsequent devotion to change, be great and, ultimately, redeem himself – for Vick to finally reach his true potential. It’s been said a million times before, but it’s true… Hollywood couldn’t write that story.

He was phenomenal this season. In five games he had more comebacks than McNabb has had in his career:

And of course, the legendary…

Vick almost pulled two other comebacks: In Chicago (Week 12), the Eagles trailed 31-13 in the fourth, before Vick willed them back to within five, but they simply ran out of time(**).  And you know what happened in the Playoffs against Green Bay.

(**)Of course, had the equipment manager given the players the proper cleats before the game stared, maybe they could have won the game in the first half.

What Vick said after the game really stuck with me: “I made a mistake, but I went down swinging.” I love that attitude. I’ve wanted to hear an Eagles Quarterback say that for so long I can’t remember. What a completely different feeling those words give you, as opposed to “I’m the captain of this ship. I need to do better” and “Some players showed their youth.”

Vick is a warrior. If you listened to Mike Missanelli’s interview with Vick yesterday on 97.5 The Fanatic, you heard Vick and Missanelli discuss how that attitude is a product of where he grew up, and was also embodied by another Virginia-native, Philadelphia-legend – and one of my all-time favorite athletes – Allen Iverson. Iverson epitomized the “Warrior” spirit that Vick exudes and their play, respectively, proves it: Reckless, selfless abandon; immense heart and pride; extraordinary athleticism; and absolutely no ability to play at less than one hundred-percent effort.

I was wrong about Michael Vick. But I’m certainly happy to admit it.

This entry was posted on Thursday, January 20th, 2011 at 7:42 pm and is filed under The Billionaire, The Devil, The Walrus. You can follow any responses to this entry through the RSS 2.0 feed. You can leave a response, or trackback from your own site.

One Response to The Curious Case of Michael Vick… Or, How I Learned to Admit I Was Wrong and Love the Quarterback