Reason #12 to Fire The Walrus

Andy Reid is a good coach.

I don’t disagree with that statement. The guy is the all-time greatest coach in Eagles history, records-wise – leading all Eagles coaches in wins, winning percentage, games coached, division titles, playoff games and playoff wins. His overall record speaks for itself: 118-73-1, a .618 winning percentage. Or does it?

Yes, Andy’s regular season record is impressive, but when you look deeper, the numbers seem slightly (or more-than-slightly) skewed.

Of the 192 regular season games played under Andy Reid, 103 have come against teams with a record of 8-8 or better, and 89 against teams 7-9 or worse. A pretty even split.

Those are telling numbers.

Sure, Reid’s winning percentage against losing teams is nearly 80 percent – meaning his teams beat the teams they’re supposed to beat. Of course, each season there is always one inexplicable lose, a game the Eagles have no business losing going in but but somehow come out on the wrong side (see: Raiders in ’09 and Vikings in ’10). For the most part, though, Andy Reid’s teams beat bad teams.

But they don’t beat good teams.

Here’s how it breaks down per season: 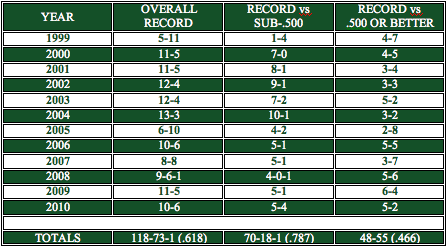 The four seasons of the Andy Reid-Donovon McNabb apex in particular, 2000 to 2004, stand out. The Eagles won 11, 11, 12, 12 and 13 games during that time-frame – dominating losing teams 41-5…  yet only going 18-16 against teams .500 or better. That five-year span saw some of the worst years of the NFC in league history – and the Eagles handled those teams rightfully so. But for some reason, they simply struggled against teams that were competitive.

It seems to have leveled off in recent years – the huge disparity between beating lesser teams and being mediocre against good teams – but at no point during Reid’s tenure have any of his teams been dominate against good teams. In fact, this past season was his best against winning teams – beating the Colts, Falcons and Giants as underdogs(*).

(*)Though – as I’ve pointed out before –  two of those wins (the Colts and the Giants) can be attributed to things Michael Vick did on the field that determined the outcome of the game.

The Eagles have played 19 playoff games under Reid, winning 10 of them for a .526 winning percentage. Against teams with 8 or 9 wins in the playoffs, the Eagles are 4-1, with all four wins coming in the first round they played and the one lose against the Cardinals in the NFC Championship Game. The trend continues, as the team is 6-8 versus teams with 10 or more wins in the playoffs. That’s 80% to 43%, almost identical to their regular season splits.

Translation: the deeper they go in the season, the better the team they face, the worse the Eagles are.

That’s an abysmal trend, and certainly one you don’t want to see over the tenure of one Head Coach.Again, the 2008 NFC Championship Game was the tipping point of the Andy Reid-era. That’s the furthest he can go as a Head Coach. Unless he can get a 13-3 or better Eagles team to a Super Bowl against an 8-8 or worse AFC team…

It’s time to Fire The Walrus.

This entry was posted on Monday, January 31st, 2011 at 8:23 pm and is filed under Reasons to Fire The Walrus, The Walrus. You can follow any responses to this entry through the RSS 2.0 feed. You can leave a response, or trackback from your own site.

7 Responses to Reason #12 to Fire The Walrus