NOT-SO BREAKING NEWS: Seth Joyner Wants To Be a Coach 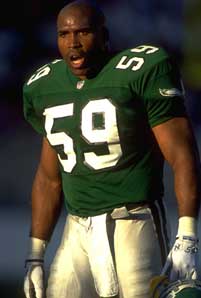 Seth Joyner, one of the all-time greats in the long lineage of Eagles Linebackers, wants to get into coaching.

If Andy and Howie truly plan on building the new defensive coaching staff from the bottom-up, then hiring Joyner to coach a woeful linebacking corps would be the logical next move. But it more than likely won’t happen.

Since the day he bought the team from Norman Braman, Jeffrey Lurie has done everything in his power to move the franchise away from the identity it’s loyal fans loved. The Kelly Green uniforms (unfortuneately). The losing (thankfully). The smashmouth, bruising, violent defense (indefensibly). His tenacity for removing every visage of a time before he owned the team was unreal. I’m surprised he retired Reggie White’s number 92 without having to be begrudgingly talked into it.

So hiring Seth Joyner – someone who embodies those mean-streaked, bodacious, angry (particularly post-Jerome Brown) and vicious Buddy Ryan Defenses from the late-80’s/early-90’s – would be a complete 180 for the Lurie-regime. But it would be a brilliant coup for a team that sorely lacks that “us-against-the-world” mentality desperately needed on Defense, especially at Linebacker.

Joyner represents the type of Linebacker that the Eagles haven’t possessed since Ray Rhodes had Willie Thomas. The Ray Lewis and James Harrison-type of terrifying, violent monster that could change a football game by himself. Sure, Jeremiah Trotter was a Running Back-seeking missile, that would explode through the line of scrimmage and blast an opposing back for a three-yard loss, but he wasn’t quite the feared headhunter that teams had to gameplan for. That was Seth Joyner.

Last week I recommended that you read Mark Bowden’s Bringing The Heat.  Chapter 10, entitled Being Seth, explores Joyner as a person, his anger and his tumultuous personal relationships. As one  of the players most affected by Jerome Brown’s death, Bowden delves deep into Joyner’s psyche, which is battered and torn, and how that misery forced Seth to take on the leadership role that Brown left behind.

“The contrast with Jerome formed a study in leadership. Jerome didn’t try to lead and never saw himself as a leader. Joy just radiated from that dancing, cast-iron-furnace frame and neon grin. Jerome made you feel as if he were on a ride that was just so damned terrific that nobody would want to get left behind. Seth, on the other hand, made you feel like he was slogging through some sort of awful crusade; you could join him if you had the stuff for it, and if you didn’t? Well, fuck you.” – Mark Bowden, Bringing The Heat (page 286)

Yes, Joyner has a grating, polarizing personality. But isn’t that what this team has been missing? Doesn’t this Defense – that has been built on speed and finesse, instead of tenacity and brutality – need someone who could put “the dog” back into them? The Eagles Linebackers especially, need a mean streak. Stewart Bradley is a nice player, but Wide Receivers don’t fear him over the middle. Moise Fokou can “put a hat” on a guy, but Running Backs don’t go to the weakside just to avoid him.

Seth Joyner might not be a typical coaching candidate and his motivational methods may be crude, but he may just be what the Eagles need. He’ll get into the faces of the Offensive Lineman when they’re underperforming. He’ll smack DeSean Jackson upside his head for acting like a jackass. He’ll (hopefully) turn Jamar Chaney into a seething, headhunting lunatic, that makes Quarterbacks shake and Running Backs brace for a beating.

The Eagles need something to toughen up that soft spot in the middle of the Defense. There’s nothing tougher than Seth Joyner.

This entry was posted on Saturday, January 29th, 2011 at 3:48 pm and is filed under NOT-SO BREAKING NEWS, The Walrus. You can follow any responses to this entry through the RSS 2.0 feed. You can leave a response, or trackback from your own site.