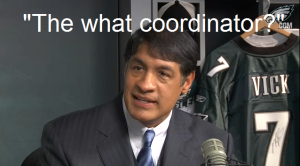 Juan Cantcoachstillo is officially OUT!

Andy Reid just announced that he has fired his best friend and replaced him with Todd Bowles. If you recall, we predicted this before the season started.

Wow… Way to start off the bye week! Can you say panic move?! Andy KNOWS his fat walrus ass is finally on the hot seat!

And if you had Juan in your 2012 Eagles Fantasy Blame League, congrats, you just won!

MUCH MUCH MORE coming later on…

This entry was posted on Tuesday, October 16th, 2012 at 9:02 am and is filed under 2012 Eagles Fantasy Blame On League, NOT-SO BREAKING NEWS, The Walrus. You can follow any responses to this entry through the RSS 2.0 feed. You can leave a response, or trackback from your own site.

One Response to NOT-SO BREAKING NEWS: Down Goes Juan