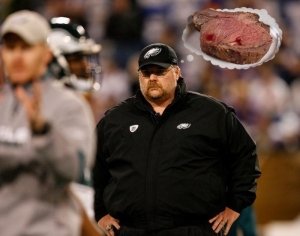 It’s sad. Not the way they lost so much – shit they overachieved all season, can’t be too mad – but more the fact that football is over in Philadelphia and a LONG winter awaits (though thank God for the Phils). That and the fact that The Walrus and his regime are still here, breaking hearts all over the Delware Valley.

And even before we could take a breath from what just transpired, The Walrus already gave us a glimpse at what the future holds for next season (you know, besides it ending with an INT): Sean McDermott (aka Ginger McDermutt) will return as defensive coordinator.

That sound you hear is Jim Johnson spinning in his grave.

Just because he’s a disciple of the legendary JJ, doesn’t mean McDermutt can fill his shoes. In fact, the past two seasons proved that Ginger can’t amount to Ray Rhodes. His players are soft, undersized and couldn’t tackle junior college running backs, let alone NFL-caliber players. Where Jim Johnson was the master of the blitz, Ginger seems to be allergic to the thought of sending anyone at the QB besides down linemen. The middle of the field has become free-range for wide receivers and tight ends. And why shouldn’t it be? Who on this defense is going to take someone’s head off? Surely not Asante Olé Samuel.

Philadelphia is a defensive-minded town. We’re the home of Bednarik, Brookshire, Bergey, White, Simmons, Hopkins, Dawkins, Buddy Fucking Ryan. We’d much rather see Trent Cole come flying off the corner to crush Eli Manning, than Vick drop back and deliver a 50-yard bomb to DeSean. The D that’s been trotted out there the last two years has been a disgrace. No collective heart. No toughness. There are no “scare the shit out of you-Ray Lewis/Clay Matthews type” warriors on this team.

Sure, there were a rash of injuries this year and multiple 7th round picks were asked to step up, but to bring Ginger McDermutt back for another year is a travesty. Eagles fans deserve better. Trent Cole deserves better. More importantly, Jim Johnson, Buddy Ryan and Bud Carson deserve better. Reid should have canned Ginger after the Titans comeback (if not earlier) and replaced him with Dick Jauron, the seasoned NFL-lifer and current Eagles defensive backs coach.

I will scream my head off for Andy to give Rob Ryan a look, but am only wasting my breath. He may eventually make a change this offseason (anything he says to the media should be taken with a grain of salt), but it will undoubtedly come from an in-house promotion.

Guess we’re satisfied with giving up red zone touchdowns and third down conversions, as long as we don’t have to pay anyone to coach.

*In his day after press conferece The Walrus claimed he was hungry for a Super Bowl… And prime rib. He also said he craved fish and prawn, but the comment was muffled by the two large tusks protrudding from his mouth.

The Day After, The Walrus | Tagged: And Another Long Dark Trophy-less Offseason Begins..., Andy Reid, Eagles, NFL, The Day After |